So there's a growing chorus of liberals in the United States led by psychos like MoveOn.org that say the "War in Iraq is unwinnable"

First off this is simply insulting of the most powerful military on the planet and second it's just plain wrong.

There is a HUGE and I mean HUGE difference from the ability to win a war and the desire to win a war.

The liberal left has sufficiently brainwashed the United States populace(through the use of video media) that wars can be fought completely septically, with smart bombs and pin point strikes, only the "bad guys" will die and/or should only be the ones that die. Kill enough bad guys and only the good peace loving populace will be left in their intact city to go about their peaceful way.

Nothing could be further from the truth! When you fight this type of war what you get is an enemy populace that becomes more and more bitter especially if one of smart bombs goes dumb and drops on some guys house killing his family. Then phase 2 happens the liberal media gets right in there with there cameras showing the dead babies and saying "look look how terrible this war is, the US is a horrible nation"

In addition you get a non-combatant populace that has no problem helping enemy soldiers or "temporarily" joining their ranks for a weekend killing spree. What do they have to worry about. If they get caught, What? maybe they go to jail?

Let's look at a little history shall we:

Fire Bombing of Dresden in WWII 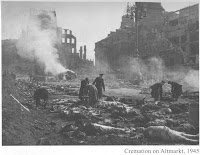 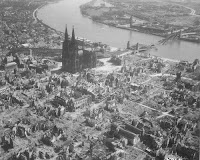 About 60 years ago when we really wanted to win a war and our soldiers weren't handcuffed by our politicians nor scrutinized by the media, we'd go from one city destroy everything and kill anyone that even looked at us wrong. Then we'd go to the next city and if there was any resistance there we'd kill everyone Men, women, children and level their businesses, factories, and homes.

This resulted in a demoralized populace, that would not resist our rule or fight a guerrilla war, cause they knew if they did, then in a few hours the bombers would be over head and Ma and Pa and baby Susie would be blown to bits. We could now control the non-combatants and they didn't help or hide enemy soldiers, that kind of action would end up with you against a stone wall and a bullet in your head, too much of it and once again in come the B17's for a little "population indoctrination" to our way of thinking.

A destroyed infrastructure, a shell shocked spirit crushed populace, a terrified nation, THAT'S how you win a war.

You don't win a war by sending in two F16's to blow up a radio antenna at 3:00AM when no one is there and then have your soldiers play cops and robbers for years afterwards.

Our distaste for seeing the horrors of war have made us ironically draw out and make war easier to start. Hey if we can "win a war" with some smart bombs and none of our guys die and for damn sure we better not see any dead babies on TV, then what the hell let's open the cage for the dogs of war to once again piss on humanity.

People are completely and utterly of the wrong mindset when it comes to using our military now. It should be the most horrifying prospect to think that the US military is coming to you nation, cause soon you'll all be dead, so guess what you better round up your troublemakers before we get there.

I'm very afraid that our inability to wage unrestricted war now in the middle east is simply going to allow the situation to simmer instead of coming to a rapid decisive conclusion, and unfortunately that simmering pot may one day explode in to this: 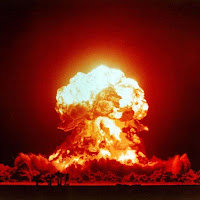 The Next President of The United States

You have seen in my previous post that I am a Fred Thompson supporter. If you want to support Fred as well here is you chance with a donation link below: