Haven't posted about Phase2 (formally known as New Voyages) in a while, and what better time to post then after a pickup shoot!

We needed to reshoot some of my scenes this weekend in order to begin the final edits on Blood and Fire, which is looking like a June or July release time. It also looks like the DAVE school will be doing some additional animation for us. They were the effects studio that did the incredible work in World Enough and Time.

My wife Amanda got in the action during the reshoots, and played a crew member helping out in sickbay! 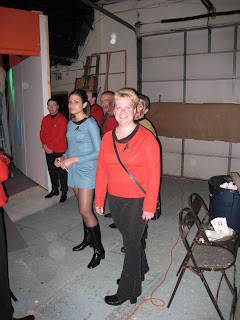 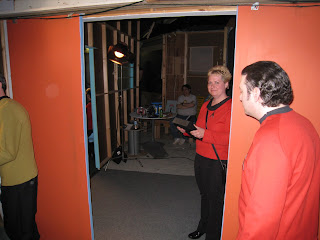 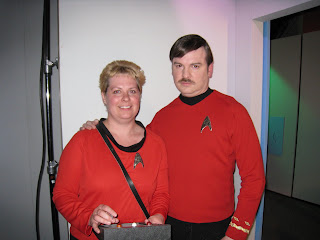 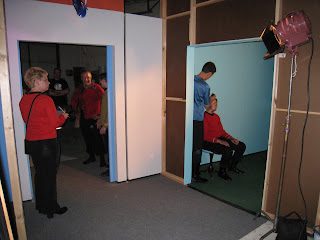 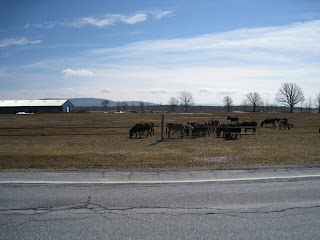 When I get in the car and drive over to the Retro Film Studios, where New Voyages, er excuse me Phase II as we now call ourselves, is filmed, the drive takes about 2 hours.

During that 2 hours there are personal mile markers that help me pass the time and confirm mentally that, yes this long boring ride is actually progressing.

1 of those mental mile markers is "Ollie" the camel, his pen is right on RT7 and he's usually out in the summer, looking at traffic, with a "Don't care about you attitude" Ollie was in the barn when I drove by this past week, so no pic of him

But another marker is what me and the wife call "The Asses", apparently there is a farm in West Addison that breeds them (they also, no kidding, teach sky diving there, presumably only to humans though)

Most of the time the asses are just huddled up next to the barn, but sometimes, when it's not raining or two hot (these asses are somewhat picky about their weather) they will come out in to the field.

It's so funny to see all these little fat asses standing around. In the Spring after the females get knocked up and push out a new ass, the little ones can be seen bounding and kicking all over the place.

Ahhh Vermont, and the things that keep me sane on my trips to New York
Posted by Charles E. Root Jr. at 2:44 PM 2 comments:

Just wanted to report some exciting news, especially in the light of $3.50 a gallon gasoline.

If there is one thing that this country needs to have a national priority is our energy independence.

You can pretend all you want that "alternative energy" sources can replace oil, but you're dreaming or have no concept of just how much oil we use in the country, not just to run our cars, but all the stuff we consume. That keyboard you're at right now, made from oil baby, the monitor you're reading this on yup made from hydrocarbons. Anyway, here is a story that the liberal media hasn't been reporting on, but needs to get out there. Full credit to Next Energy News as the source:

Massive Oil Deposit Could Increase US reserves by 10x

America is sitting on top of a super massive 200 billion barrel Oil Field that could potentially make America Energy Independent and until now has largely gone unnoticed. Thanks to new technology the Bakken Formation in North Dakota could boost America’s Oil reserves by an incredible 10 times, giving western economies the trump card against OPEC’s short squeeze on oil supply and making Iranian and Venezuelan threats of disrupted supply irrelevant.

In the next 30 days the USGS (U.S. Geological Survey) will release a new report giving an accurate resource assessment of the Bakken Oil Formation that covers North Dakota and portions of South Dakota and Montana. With new horizontal drilling technology it is believed that from 175 to 500 billion barrels of recoverable oil are held in this 200,000 square mile reserve that was initially discovered in 1951. The USGS did an initial study back in 1999 that estimated 400 billion recoverable barrels were present but with prices bottoming out at $10 a barrel back then the report was dismissed because of the higher cost of horizontal drilling techniques that would be needed, estimated at $20-$40 a barrel.

It was not until 2007, when EOG Resources of Texas started a frenzy when they drilled a single well in Parshal N.D. that is expected to yield 700,000 barrels of oil that real excitement and money started to flow in North Dakota. Marathon Oil is investing $1.5 billion and drilling 300 new wells in what is expected to be one of the greatest booms in Oil discovery since Oil was discovered in Saudi Arabia in 1938.

The US imported about 14 million barrels of Oil per day in 2007 , which means US consumers sent about $340 Billion Dollars over seas building palaces in Dubai and propping up unfriendly regimes around the World, if 200 billion barrels of oil at $90 a barrel are recovered in the high plains the added wealth to the US economy would be $18 Trillion Dollars which would go a long way in stabilizing the US trade deficit and could cut the cost of oil in half in the long run.